I discussed the effect of sequestration on funding at the National Institutes of Health (NIH) in a previous blog posting. (1) Last week, however, the NIH released more detailed information regarding the number of grants proposed for funding in 2013. (2) According to ScienceInsider, a web news medium of Science online, 1357 fewer grants will be awarded institute-wide at the NIH this year than in 2012 for a total of 34,902 awards. This translates into an overall decrease in the budget to $29.15 billion. Although $29.15 billion may seem like a formidable sum of money, the impact of a loss of $1.71 billion from 2012 funding levels is real, and researchers ranging from early-career to established investigators are worried.(3) So worried, in fact, that the NIH Director, Dr. Francis Collins, established a Twitter feed last Tuesday at #NIHSequesterImpact to allow the biomedical research community to have a place to express their woes. (4)

And what about those early career investigators? The “Comments” section of the ScienceInsider article, entitled, “NIH Details Impact of 2013 Sequester Cuts,” is filled with frustrated musings by early career scientists who are highly doubtful that they can continue in a research career. One speaks of the possibility of quitting science to teach high school, another writes of labs that are unable to hire talented young investigators.  Still another (who comments under the pseudonym “PhDpony”) states that the budget cuts are  “only going to breed rotting, putrid brains because there are less opportunities for young scientists to pursue what they love.” (3) Did he say, “…..Rotting, putrid brains”? Ewwww.  What a bad visual!

Is this where the sequester has taken us? I should hope not, but if this is any indication of the spirit of discouragement that has descended upon the early career biomedical research community, I do not know how our nation will be biomedically research-competitive in the 21st century.

As for the devastating impact of these budget reductions on patients, this is real, as well.  Funding cuts translate into fewer biomedical research advances and reduced medical services and resources for patients.  A recent U.S. News and World Report article, “Sequestration Could Make the U.S. Sicker, Fatter,” highlights this phenomenon.(5) These concerns are echoed more extensively in last month’s New England Journal of Medicine opinion piece, “Budget Sequestration and the U.S. Health Sector.”(6)  Although key health provisions under the Affordable Care Act, including the rollout of the health marketplace exchanges for 2013-2014, are largely protected from the sequester, other health programs will be cut.  Also diminished are federal agencies’ capabilities of administering and monitoring these programs.

Image: A health surveillance program that could be negatively impacted by the sequester. (Image Credit: Jim Gathany/Centers for Disease Control and Prevention (CDC), National Center for Health Statistics (NCHS))

Some of the programs targeted for decreased funding include HIV and AIDS testing and treatment programs, surveillance programs (e.g. tuberculosis surveillance), and child and adult immunization programs.  A host of other health programs will suffer, as well, perhaps resulting in an overall decrease in healthy quality of life for all those affected by the sequester. When will decision-makers, lawmakers, and key stakeholders take notice of the gravity of the sequester situation and its harmful effects and do something to stop the damage?  Often, those in key positions of power with the ability to make a difference must be personally impacted in a significant enough way before real change can occur.

I am reminded of the time in our nation’s history in which we were ravaged by dust storms caused in part by massive topsoil erosion in America’s heartland. 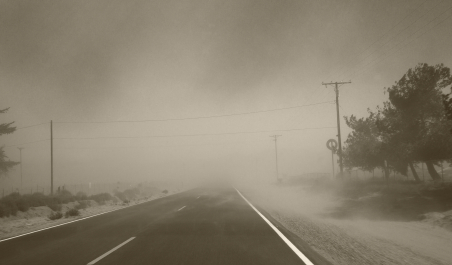 The Dust Bowl era persisted for many years.  However, those who lived on the east coast did not take notice until a massive dust cloud assaulted both Washington, D.C. and New York in May 1934.  In fact, today, May 11, marks the 79th anniversary of that awful event.  But it caused people to take notice, and those in power to do something about it finally did. The lesson here? Let’s do what we can to prevent the coming storm.

Repeal the sequester.  Now.  We do not have to let history repeat itself.

Unfortunately, however, it often does.

Error: Twitter did not respond. Please wait a few minutes and refresh this page.

WSJ's blog on health and the business of health.

Examining the intersection of law, health care, biotechnology, and bioethics