Last month, I wrote an article about triskaidekaphobia, a syndrome suffered  by individuals who have a fear of the number 13.  The article discussed all sorts of superstitions and unfortunate occurrences  associated with the number 13, specifically because the year 2013 is fraught with difficulty for people  who suffer from triskaidekaphobia (1)

By contrast, the number 13 is associated with a number of fortuitous milestones in African-American history.  Our current year marks the 150th anniversary of the Emancipation Proclamation on January 1, 1863.  Slavery in the United States was abolished with the passage of the 13th amendment. 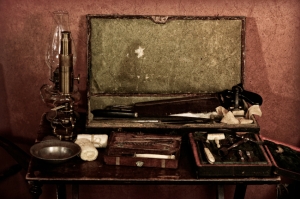 As Black History Month ends, I would be remiss to allow it to pass without acknowledging a great medical pioneer.  This is someone for whom the number 13 is also associated with greatness and success.  Born in New York on April 18, 1813, Dr. James McCune Smith rose from humble beginnings as the son of a former slave to become the first black (now “African-American”) American to receive a medical degree in the United States.  (Note: Although Dr. McCune Smith was the first black American to earn a medical  degree, Dr. James Durnham (1762-1802?)  was the first recognized black physician in the United States.) (2)

Dr. McCune Smith understood the problems of racial inequality and the ills of slavery at an early age.  The young Dr. McCune Smith also comprehended the importance of working to correct these problems.  Remarkably,  his first abolitionist speech was at the age of 11.  He studied at the African Free School, after which he attended the University of Glasgow in Scotland. It was there that he completed his undergraduate, graduate (Masters degree), and medical education by 1837.  Although he would likely have preferred to remain in the United States, his race precluded him from attending school here.  The schools simply did not offer him admission.  Dr. McCune Smith returned to America and treated patients of all races and stages of life.  Despite a successful medical career, he was denied membership in the American Medical Association.

Dr. McCune Smith also contributed to the field of medicine by becoming the first black person to write a medical case report.  However, it was actually presented to the medical community by a white physician colleague  due to fear that it would not be well-received if it were widely known that the case report had been written by a black man. This did not deter Dr. McCune Smith, who later became the first black man to author a medical scientific paper.  He continued to publish prolifically throughout his medical career.

Dr. McCune Smith lectured extensively, condemning the widely accepted myth that slaves were healthy, happy,well-adjusted, and as a result, better off as slaves than as free men and women. His impact upon both white and black, free and slave, physician and non-physician, was far-reaching and is still experienced to this day.

The 1865 death of Dr. McCune Smith closely coincided with the passage of the 13th amendment. Finally, this pioneer physician’s dream of freedom for all was realized. ( 3, 4)

Dr. McCune Smith was a trailblazer for a long line of African-American physicians who followed in his footsteps:

It is not easy to be a “first.”  Being a pioneer takes determination, hard work, and a willingness to stand up for your beliefs.  It takes the strength of your convictions and courage in the face of adversity.  It also takes a willingness to help others who wish to follow in your footsteps.  Dr. McCune Smith set the bar high in this regard.  So did the others who followed in his footsteps.  I hope that I may do the same in my life and work.

Error: Twitter did not respond. Please wait a few minutes and refresh this page.

WSJ's blog on health and the business of health.

Examining the intersection of law, health care, biotechnology, and bioethics